For more information about IDEA refer to the official IDEA website. 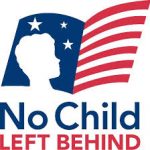 Elementary and Secondary Education Act (ESEA), currently known as No Child Left Behind, Public Law 107-110, signed into law in 2002

The ESEA was originally signed into law by President Lyndon B. Johnson in 1965. Although the Act has been reauthorized several times, the latest revision was authorized in 2002 and is known as the No Child Left Behind Act (NCLB) of 2001. It is well overdue for reauthorization, something that is supposed to happen every five years. NCLB was to …close the achievement gap with accountability, flexibility, and choice, so that no child is left behind.

For more information about ESEA visit the Department of Education website.