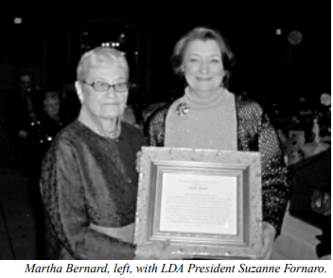 We were saddened to learn of the passing of Martha Bernard, 96, President of ACLD (now LDA) in 1973-74. Martha passed the morning of January 31, 2020 at home in New York City after a brief decline. Her family members were with her. Martha was a founding member of the Association for Children with Learning Disabilities (ACLD, now LDA) and remained active in LDA. She was the current Secretary for LDA of New York and chaired the national Support Services Committee until 2018. Up until a few years ago, she attended national conferences–the last was Baltimore in 2010–when she could travel to the site by train. She loved attending the annual conference to occasionally help out at the registration desk but mostly to visit with the other past presidents.

Shortly before Martha was elected President in 1973, she was the lead organizer of the annual national conferences. With the organization facing financial ruin, she turned it around by holding a conference at the Waldorf Astoria hotel in New York City in the early 1970’s. The leadership that year was projecting 2,500 attendees – and were shocked when nearly 7,000 people showed up. They were lining the hallways trying to hear and learn as much as they could from the early researchers in the field. She defined and wrote conference policies and after that conference, the association was able to sustain itself year after year, decade after decade. She took great pride in that conference, and others she would lead, and frequently reminisced about those days when calling the national office.

Martha sat on numerous local and national boards, including several private schools in New York City. She was active into 2019, participating in meetings via conference calls when she could no longer travel.

She is survived by a daughter. A memorial of her life is being planned.