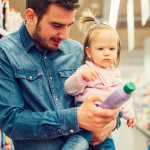 As the federal government repeatedly fails to protect children from toxic chemicals and pollutants, states are stepping into the breach. This year, state efforts to ban neurotoxic flame retardant chemicals and the brain-altering pesticide “chlorpyrifos” are providing LDA with opportunities to help make products, food and water safer for children’s growing minds and bodies.

These chemicals leach – or migrate – from furniture, mattresses, electronics and other products into house dust, and into people’s bodies. The toxic flame retardants are found in pregnant women, breast milk and babies.

Alaska is leading the country in regulating entire classes of toxic flame retardants, to ensure that chemical makers can’t simply replace one toxic chemical with another. This spring, LDA of Alaska, directed by Matthew Talley with his parents Alison and Larry, provided testimony to the Alaska legislature detailing LDA’s concerns with the flame retardant chemicals.

In April, after a months-long coalition effort led by Alaska Community Action on Toxics and involving nurses, doctors, firefighters, parents, grandparents, scientists and LDA of Alaska, the state banned the use of four classes of flame retardant chemicals in children’s products, electronics enclosures, furniture and mattresses.

LDA of Georgia has been in touch with a Georgia legislator’s office interested in introducing a flame retardants ban, and will work with LDA’s national Healthy Children Project coordinator and Georgia partner groups to provide LDA perspective and information to the legislature. It’s likely other states will undertake efforts to regulate flame retardant chemicals with LDA affiliates ready to assist.

State action on chlorpyrifos: Dozens of scientific studies show that exposure to a pesticide known as chlorpyrifos, especially during critical windows of vulnerability such as pregnancy, can harm the developing brains of infants and children. This pesticide is heavily sprayed on fruits and vegetables such as apples, strawberries and oranges. Fetal and childhood exposures to chlorpyrifos, even at low levels, are linked to lasting problems with learning, behavior and attention.

The U.S. Environmental Protection Agency’s own scientists found that, in children 1 to 2 years of age, exposure to chlorpyrifos on food is 140 times higher than what the agency deems acceptable. The scientists recommended a ban on this dangerous pesticide. But in March 2017, the Trump administration announced EPA will not prohibit the use of chlorpyrifos on food crops. That decision has been legally challenged in court, and LDA of America is a party in the litigation.

Six states this year have introduced bills to ban use of chlorpyrifos. This spring, New York legislators overwhelmingly passed a ban and sent it to the Governor’s desk for signature. California has announced it will regulate to end use of chlorpyrifos. In Connecticut and New Jersey, LDA leaders are providing written and oral testimony to convey LDA concerns with this pesticide to state legislators. There will be additional opportunities in coming months for more LDA affiliates and members to get involved in helping to protect children from this terrible pesticide.

In state and federal efforts to prevent the use of toxic chemicals, LDA is frequently the only organization raising the voices and concerns of people affected by learning and developmental disabilities. LDA leaders across the country are working to make a difference, and ensure that all children are able to reach their full potential, safe from chemicals and pollutants that can disrupt brain development.