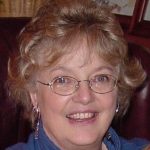 We are saddened to learn of the passing of Sharon Bloechle, a long-time advocate and leader in LDA of America. Sharon grew up in Regina, Saskatchewan, moved to Nebraska, met and married her husband Bob, and together they became parents of three children.  As a parent of a child with learning disabilities, she reached out to the Learning Disabilities Association for information. She joined LDA of Nebraska and soon became LDA State President. In the late 1980s as President of LDA of Nebraska, she attended the national conference and joined with other state presidents who made up the State Affiliates branch of national LDA.

It wasn’t long before her leadership abilities were recognized at the national level, and she was voted onto the LDA Board of Directors as the State Affiliates Representative and several years later became Treasurer for the LDA Board of Directors (BOD).  Sharon served on the national BOD for many years in several different positions and also served as the communications committee chair. In the early 1990s, with her abilities in technology she worked with the national office to bring LDA into the age of social media.  She also was one of the driving forces in setting up and finding funding to design and launch the first LDA website.

Members of the national board of LDA and members of the working committees are all volunteers.  As a parent volunteer, Sharon recognized the great need of the majority of parents who find out they have a child with learning disabilities and have no idea how to try to understand special education state and federal laws, then apply that information to working with the school system to make sure their child’s individualized educational needs are met. Sharon was a “champion” for all of those parents, working to make sure they were able to obtain the education, information, and advocacy they needed so their child would be able to receive the special education and general education they needed to succeed in school and in life.  Sharon taught parents to not only be aware of their child’s educational weaknesses but also their educational strengths that might be applied to higher level courses.

On behalf of the many families that Sharon helped through the years and her leadership devoted to LDA of Nebraska and America, we thank her family for sharing this wonderful woman with us.