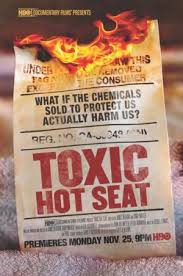 Flame retardant chemicals are in our couches and chairs in amounts measured in pounds. The chemicals migrate from upholstered furniture into household dust, and from there into our bodies and our children’s bodies.  These chemicals are found in pregnant women, in umbilical cord blood and in breast milk.

Why does that matter?  In the last five years, three major studies of pregnant women and children in the U.S. all reached the same conclusion: children exposed in the womb to flame retardant chemicals showed measurable decreases in IQ and increases in hyperactivity. These cognitive and behavioral problems – like the chemical culprits – are lasting.

The kicker is that a major investigation by award-winning Chicago Tribune journalists found that the toxic flame retardant chemicals don’t prevent fires. These same chemicals are linked to cancers, particularly cancers increasingly found in higher rates among firefighters.

Why are our children’s minds and learning capacity being hindered and harmed by these chemicals? Why are toxic flame retardants in our furniture, electronics, homes and bodies? Is anyone doing anything about it?

LDA conference attendees have an opportunity to find out at a screening of the HBO documentary “Toxic Hot Seat” on Wednesday, February 18 from 6:45 to 9:30 p.m. LDA is especially pleased that the Chicago Tribune journalists featured in the film will join us to introduce the movie and answer questions.

In 2012, Patricia Callahan, Michael Hawthorne, and Sam Roe wrote the investigative series “Playing With Fire,” which uncovered the truth about toxic flame retardant chemicals and the multi-million dollar campaign of fear, lies, and sham science launched by the tobacco and chemical industries to fill our homes with these carcinogenic and neurotoxic chemicals. The series has won five national awards and was a finalist for the Pulitzer Prize.

In response to the newspaper series, California’s state legislature changed a key standard for furniture flammability that will enable furniture makers to eliminate use of the toxic chemicals. Using the backdrop of the Chicago Tribune’s investigation, “Toxic Hot Seat” interweaves the stories of firefighters and mothers, scientists and journalists, politicians and activists whose experiences and concerns with flame retardants led them to join forces to take on the chemical industry.

LDA leaders from around the country participated in the D.C. rally for tougher laws on chemical safety that is shown in the film. Sandy Cort, past Board Member from LDA-Maine, is in a scene at the Maine State House. In 2014, LDA’s national office worked with firefighters and the Safer Chemicals Healthy Families coalition to host a press conference and screen “Toxic Hot Seat” in Pittsburgh.

LDA is enormously pleased to offer this opportunity at the national conference to see the film and hear in person from the courageous journalists whose work brought about changes that will reduce American children’s exposures to these toxic chemicals shown time and again to interfere with healthy brain development and learning.

The evening begins promptly at 6:45 p.m. on Wednesday, February 18 with opening remarks and refreshments, followed by the film. The event is free, but registration is required, as we anticipate a large crowd. Watch the trailer at http://www.toxichotseatmovie.com