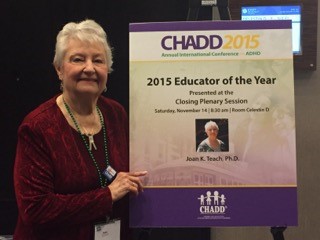 Dr. Joan Teach, LDA Georgia, was honored as the 2015 CHADD Educator of the Year at the annual CHADD conference in New Orleans on November 14, 2015. Dr. Teach has been a special educator working with the LD/ADHD population since 1960 and served as the Principal/Director of the Lullwater School until her retirement in 2005. After retiring Joan has been active as the President of LDA Georgia, President of the Board for Kids Enabled, Director of the Community Resource Center in Atlanta and started a collaborative group, GOLD, Georgia Opportunities for Learning Differences. She designs and presents workshops for parents, adults with LD/ADHD and females with ADHD in Atlanta as well as speaks at conferences such as LDA and CHADD. Joan also has a passion for the LDA Healthy Children’s Project volunteering her efforts to reduce the incidence of learning disabilities in future populations. She also travels around the world educating individuals in other countries about the struggles of females with LD/ADHD through game simulation. Congratulations Joan Teach!